Nowadays, machine learning plays an important role in quantitative strategies. Different machine learning algorithms offer us various options to deal with data. Most of the time, we are using supervised learning methods, where the ground truth is given in the input data to supervise the model. Such data is referred to as labelled data. Supervised learning is widely used in prediction tasks, such as the prediction of excess returns.

Here is a brief summary of the main topics to be covered in this article:

Statistical methods form the basics of machine learning. To understand the basic unsupervised learning algorithms, some background in statistics is required.

One of the most fundamental statistical theory is the Bayesian Theorem. It defines a statistical point of view on the connection among data, the observation and the prediction. Bayes defined probability with a prior hypothesis. Observations provide evidence to update the probability of the hypothesis. The theorem can be represented by the following formula:

In the last paragraph, we have introduced the meaning of likelihood. For machine learning, when estimating the parameters of a model given a dataset, we can use maximum likelihood estimation. To perform maximum likelihood estimation, we usually have an assumption that all our data points in the dataset are i.i.d. (independently and identically distributed). Suppose we have the dataset D = [(x1, y1), (x2, y2), …, (xn, yn)] and a model with parameters w. Then the likelihood function can be denoted as:

Having introduced the mathematical and statistical background for the main topic, we still have to introduce a fundamental model of unsupervised learning called K-Means. K-Means is an unsupervised clustering algorithm to partition unlabelled data into different clusters. More formally, suppose we have a dataset: {x1, x2, …, xN} consists of N observations of a random D-dimensional Euclidean variable x, the goal of the K-Means algorithm is to partition the data into some number K of clusters.

To be more specific, we can have the following example to partition the data into 2 classes: 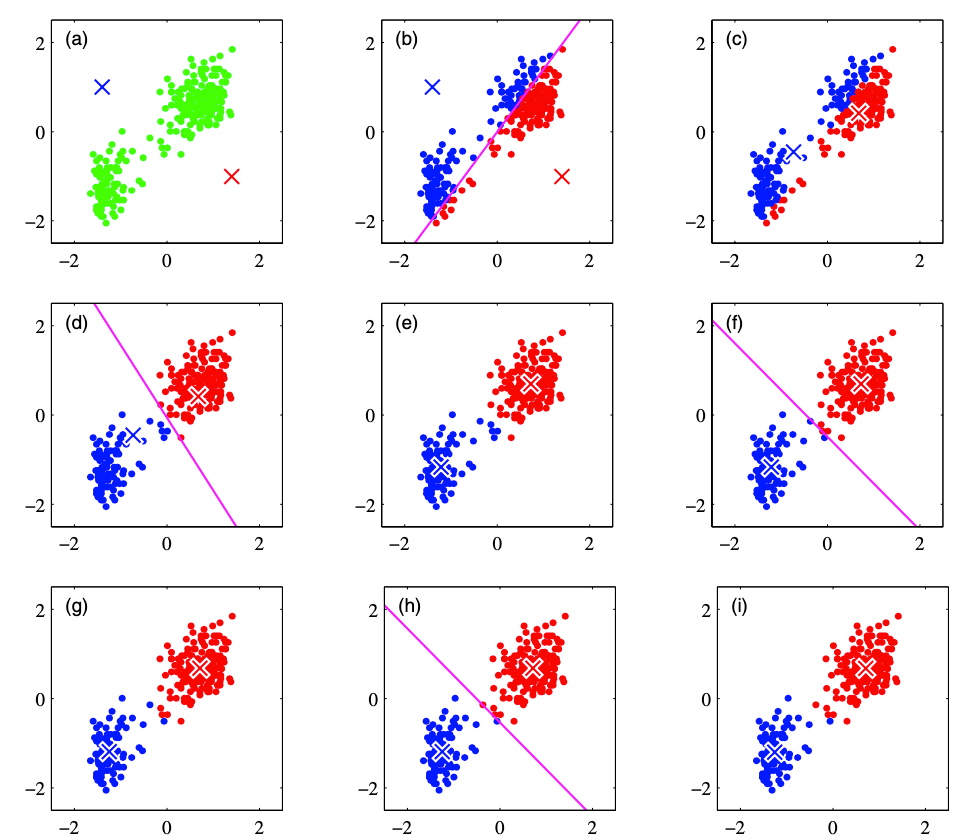 Mathematically, the process of the K-Means algorithm can be described as follows:

We can then obtain the optimal update for the current 𝜇k:

The two-phase iteration is performed until there is no change in {rnk} and  {𝜇k}. This algorithm guarantees a monotonic decrease of the objective function, and it is guaranteed to find a local optimum. But the k should be determined prior to the execution of the algorithm. The following figure shows how different choices of K influences the cost function, based on the data points provided in the left subplot. Usually, we choose the K that would not lead to a sharp decrease of the objective function anymore (if we further increase it). For example, in the right subplot, we can see the decrease of the cost function becomes relatively flat when K is increased from 4 to 5. So, K=4 would be the best setting, in this case, to guarantee a satisfactory value in the cost function, as well as to achieve desirable generalization.

Before formally step into the discussion of the E-M Algorithm, it is important to learn about the problem settings. Therefore, we introduce the concept of “mixture model”, as well as the definition of “latent variable” in this section.

As the name suggests, latent variables are variables in a distribution that you cannot directly observe. For example, Consider a probabilistic language model of news articles, where each article x focuses on a specific topic t (eg. finance, sports, politics). So, a more accurate model is p(x | t) * p(t). The topic t is unobserved directly but introduced by us. If we are to use the more accurate model, we need to somehow obtain the distribution of t. Therefore, if we take the latent variable into consideration, our model could become more robust under different settings.

The most important application of latent variables is the mixture model. In this section, we focus on Gaussian Mixture Models, to give us an overview of how mixture models work.

Suppose we have the following mathematical settings, and we have k different Gaussian distributions included in the mixture model

z: which Gaussian distribution the observed x belongs to  (if k Gaussian models, z can be 1, 2, …, k) 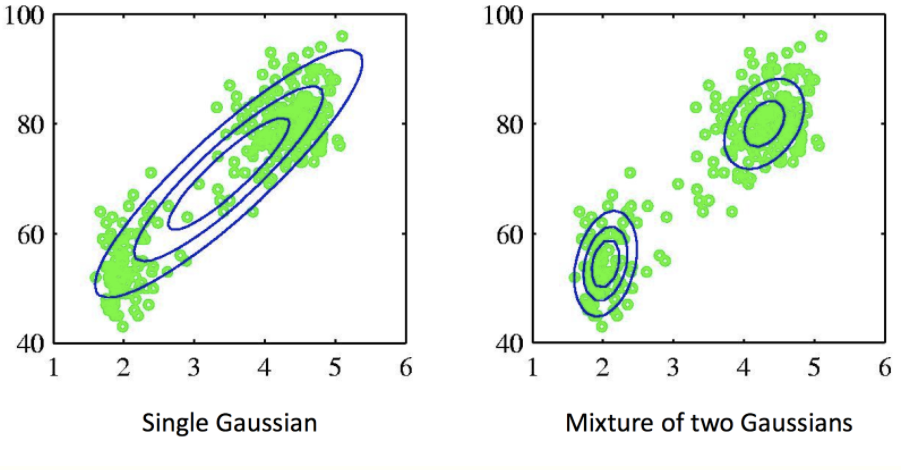 How can we fit a Gaussian Mixture Model into a dataset? The E-M algorithm provides a workflow.

The full name of the E-M Algorithm is “Expectation-Maximization Algorithm”. As the name suggests, the concept of “expectation” is used during the execution of the algorithm.

To better understand the E-M Algorithm, we need to have a concrete problem setting: Consider GMM as a discrete latent variable model:

Latent variable is z (K-dimensional binary random variable, 1-of-K representation), with z = [z1, z2, …, zK]. So z only has one element equal to 1, and all other elements are 0. This is similar to the one-hot encoding scheme. Then we can define the joint distribution: p(x, z) = p(z)p(x | z). The marginal distribution is p(zk = 1) = 𝜋k. When we write z as the one-of-K encoding, the marginal distribution of z can be represented as:

Then, we consider the conditional distribution of x given z:

which can be written with z in the vector form:

We can then have the marginal distribution of x:

To resolve this issue, we define an important quantity, which is the posterior probability of z given observed x: 𝛾(zk) = p(zk = 1 | x), which can be calculated with Bayes’ Theorem:

The corresponding result for Gaussian Mixture Model is:

This quantity is called “responsibility”. We encounter this quantity when we try to take the partial derivative regarding 𝜇k:

However, direct optimization of the log-likelihood is intractable. And it seems this approach does not take the advantage of “latent variable”. If the “responsibility” term is treated as a whole, the problem can become easier.

The complete-data likelihood can then be represented as:

And the corresponding log-likelihood is:

However, in practice, we have no idea of the value of znk because z is the latent variable whose ground-truth value can never be observed. We can only learn about z by observed x, and calculate the posterior probability:

The expectation is exactly the “responsibility” term. That is how we can make use of this term in the analysis. Then, instead of maximizing the complete-data log-likelihood, we maximize its expectation, given x and the set of parameters Θ: ({𝜋k}, {𝜇k} and {𝛴k}).

So the problem becomes maximizing the above expectation of the complete-data log-likelihood. It is therefore called the “Expectation-Maximization” (EM) algorithm.

Then, we can solve the corresponding {𝜋k}, {𝜇k} and {𝛴k} by just setting the partial derivatives to 0 and solve the equations:

By defining Nk as the effective number of samples in the kth cluster:

We can represent the results of the current optimal update of the parameters as:

and 𝜋k = Nk / N. After having the updated parameters, we calculate the new “responsibility” for us to perform the next update of the parameters. The E-M Algorithm iteratively runs until there is no further change in the parameters. It is guaranteed to find at least a local optimum. Each update will lead to an increase of the complete-data likelihood before convergence.

A formal pseudo-code of the E-M Algorithm is as follows:

Steps 2 and 3 are repeated iteratively until convergence.

Below is an illustration of EM Algorithm run on the same dataset as we have previously shown in the demo of K-Means. The dataset can be partitioned in a mixture of 2 Gaussian models. The colors are continuous, indicating the posterior probability of each data point belonging to a certain cluster. 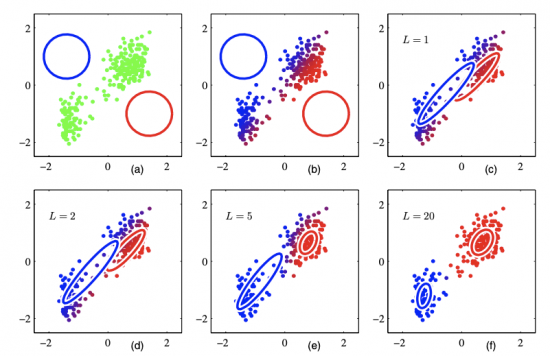 We can see there are some similarities between K-Means and EM Algorithm. Both adopt an iterative approach to find the best parameters. However, K-Means is based on geometric features (Euclidean distance), while EM Algorithm is based on statistical analysis.

EM Algorithm is sensitive to the initialization of the number of clusters and parameters. Different initialization will lead to completely different results in the final complete-data log-likelihood:

Therefore, the initialization is important. We usually run K-Means prior to running the EM Algorithm of a Gaussian Mixture Model to determine the number of clusters. The cluster centers of the GMM can be set as the cluster centers of the K-Means algorithm. The variance of the GMM is also set as the sample variance of each cluster obtained by K-Means.

In practice, EM Algorithm can be sometimes slow to reach convergence. There are situations where gradient-based methods are favoured over EM Algorithm in parameter estimations. We can have the example of the Gaussian Mixture Model again for our analysis.

As we have introduced, the maximization of the likelihood of a Gaussian Mixture Model is not a convex problem. Theoretically, using a gradient-based method can easily make the parameters get stuck in a local minimum. However, research has shown that if we want to fit a Gaussian Mixture Model on large amounts of high dimensional data, stochastic gradient descent (SGD) is superior to the traditional EM Algorithm. When the dataset gets very large, the EM Algorithm cannot be directly performed on the whole dataset. Many researchers have explored the possibility of performing the EM Algorithm for online data / in a minibatch. However, as there is no learning rate in EM Algorithm, it becomes difficult for the optimization process to be scalable to batch size. But for SGD or mini-batch gradient descent, the likelihood function can be optimized without looking at the whole dataset.

A recent study has proposed an SGD-based algorithm to tackle the abovementioned problem on a large and high-dimensional dataset. The related paper has proposed a workflow of maximizing the log-likelihood. First, we can use SGD to optimize a lower bound of the log-likelihood instead of the log-likelihood itself. Then, some enforcing mechanisms will be performed to ensure the sum of all {𝜋k} is 1. Finally, annealing procedures are introduced to avoid undesirable initial states and local minimum. This fine-tuned SGD-based algorithm on GMM outperforms EM Algorithm in some high-dimensional dataset, such as MNIST. Some results are shown in the below table: